Conducting full-compliance immunity tests like burst and surge, suitable accessories are required besides the disturbance generator: calibration accessories, in order to perform periodical verification / calibration as required, coupling decoupling networks, in some cases coupling clamps or capacitors, etc. This article will focus on coupling decoupling networks for burst and surge immunity tests, as described in IEC 61000-4-4 and IEC 61000-4-5.

What is a coupling decoupling network? 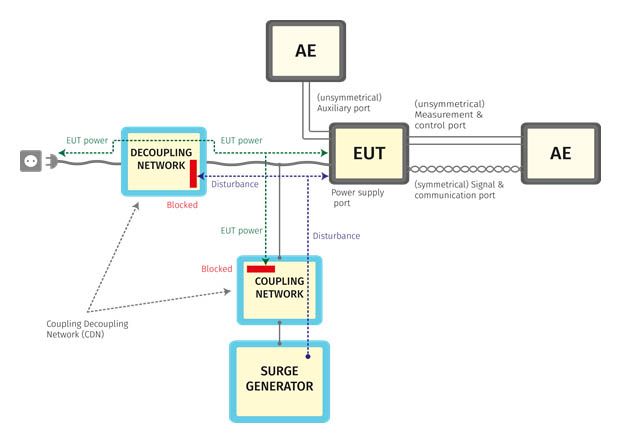 Hence, a coupling decoupling network allows the application of disturbances to powered EUT lines and thus efficiently simulate the occurrence of disturbances in the power network, as if they occurred due to phenomena typical to these environments (power networks, communication lines, etc.).

What is coupling path?

In the example provided above, disturbances are applied to EUT supply port / lines by means of a CDN. This explanation is provided specifically for surge test (IEC 61000-4-5) and will be extended to other types of disturbances subsequently. It is thus assumed that in the diagram above, the power port where the CDN has been connected is single-phase and consists of three lines: Line (L), Neutral (N) and PE (Protective Earth). Since the disturbance is applied between two points, or lines, the possible coupling paths are: L to N, L to PE and N to PE. A coupling path represents a specific selection to connect generator’s output terminals (High and Low) to EUT’s port. When connecting the High and Low of surge generator to L and N lines, the coupling is considered a differential mode coupling. When the High and Low of generator are connected to L and PE respectively, or N and PE, the coupling is common mode. As a rule, whenever the Low terminal of the generator is connected to PE (or ground plate) the coupling is considered a common mode one. When performing a complete surge test as per IEC 61000-4-5, both differential mode (L to N) and common mode (L to PE and N to PE) are selected successively. These coupling modes are presented in the diagram below.