Ever since the field of “Electromagnetic Compatibility” (EMC) became mainstream, its principles and methods are applied in order to ensure that electric and electronic equipment is performing as intended in its environment and is safe to use. Initially carried out for quality purposes, the EMC tests and measurements have basically become an essential precondition for marketing any product that contains electric/electronic components. For the purpose of this description, an EQUIPMENT UNDER TEST (EUT) exchanges energy with its ENVIRONMENT through different PORTS, as described in the simplified diagram below. 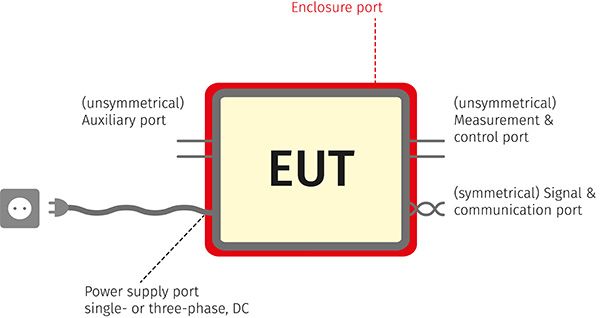 What is conducted and radiated emission?

Radiated emission is generally transferred to the environment through the Enclosure port, but the cables attached to EUT’s ports can also act as unintentional antennas and radiate energy. The radiated emission is limited through different regulations and technical standards, while its measurement takes place is controlled environments like anechoic chambers or Open Area Test Sites (OATs).

Conducted emission represents the energy transferred unintentionally from EUT to the environment through the conductors attached to its ports. In this case, the power source/network and other Auxiliary Equipment (AE) are considered part of the environment. An example of conducted emissions measurement is provided in the standard IEC 61000-3-2, which specifies limits for current harmonics at an EUT’s power supply support under certain reproducible conditions. Such measurements can be performed with test systems like HAR-1000.

What is conducted and radiated immunity?

The ability of an EUT to function as intended in its environment, in which conducted and radiated disturbances may exist, is considered a satisfactory EMC immunity.

Establishing the immunity of an EUT implies simulation of disturbances expected in its intended environment. Similar to radiated emission measurement, radiated immunity tests are performed usually in controlled environments.

The assessment of EUT’s conducted immunity may or may not require special test setups or environments, depending on the type of disturbance. The simulation of conducted disturbances, with the purpose of establishing an EUT’s immunity level, encompasses a broad range of applications and is described in standards applicable to more markets. As subcategories, one could mention immunity to conducted low frequency or high frequency swept disturbances, narrowband or broadband disturbances, immunity to impulse disturbances (sometimes called transients), short-term or long-term, repetitive, disturbances, etc. Technical requirements for conducted immunity assessment of household or industrial equipment are generally associated with International Electrotechnical Commission (IEC) standards, whereas other type of equipment is assessed according to other standards: military equipment generally according to MIL series of standards or similar, avionics equipment according to RTCA DO-160 or manufacturer standards, telecom equipment according to International Telecommunication Union (ITU) standards or similar, to name just a few. In the following section, a part of IEC immunity requirements for household and industrial equipment will be introduced, with particular focus on immunity to impulse disturbances, or transients.

The IEC 61000-4-X series of standards describes requirements for immunity tests on a broad range of EUTs, generally connected to a power grid. The phenomena described in the IEC 61000-4-X series is representative for the environments mentioned above. Full-compliance testing implies the use of disturbance generators and accessories that allow the precise reproduction of signal within tolerances specified by the standard, as well as following the prescribed calibration and testing steps in an environment that also respects standard requirements. While in other fields “pre-compliance” testing for development purposes would have the potential to deliver some insights, immunity to conducted disturbances and particularly impulse tests might generally require a full-compliance test system in order to obtain meaningful results.

Electrical Fast Transients (EFT) or Burst is a disturbance occurring in low-voltage networks when connecting or disconnecting inductive loads. Even if an EUT did not contain inductive components, a longer power cord already introduces inductance in the circuit. Hence, the occurrence of burst phenomenon is relatively high and all equipment connected to the power grid requires an immunity test. Standardized high-voltage bursts (trains of impulses) can be generated and coupled to the power lines by means of a coupling/decoupling network (CDN) on power lines. The IMU Series of generators from EMC PARTNER generate full-compliant burst signals up to 4 kV, 5 kV, 6 kV or 7 kV depending on the model and suitable coupling/decoupling networks for power lines, as required in latest edition of IEC 61000-4-4. Coupling on communication, control, auxiliary lines can be performed by a means of a capacitive coupling clamp, like the CN-EFT1000.

Requirements for surge immunity tests are specified in IEC 61000-4-5 (up to 4 kV) or ANSI/IEEE C62.41 and ANSI C62.45 (up to 6 kV). Along burst phenomenon, surge constitutes a disturbance that can occur very often in the supply grid, due to switching, resonances associated with switching, faults, and eventually reach other types of ports than power supply ports, since surges can also be produced by lighting strokes.

The series of phenomena and test requirements associated with voltage dips, short interruptions and voltage variations on AC lines are described in IEC 61000-4-11 and IEC 61000-4-34. Due to the relatively fast switch time and high inrush currents that appear during these disturbances, EUTs may be subjected to considerable stress. The IMU generators and suitable accessories can be utilized to successfully assess immunity to voltage dips, short interruptions and voltage variations.

A special test considered closely related to/part of conducted immunity tests is Electrostatic Discharge (ESD). In IEC 61000-4-2, test requirements and levels defined are meant to ensure an EUT’s immunity to ESD phenomenon produced by an electrically charged human body when touching it (i.e. the EUT). Such disturbances can be generated with IMU generators and suitable accessories (EXT-IMU E primarily), but also with the dedicated ESD3000.

Immunity tests to Damped Oscillatory Waves according to IEC 61000-4-18 can be carried out with the generator DOW-CG1 and suitable accessories.